I’m pondering the influences in my life that have brought me to creating art that I create: why does this particular ‘thing’ get made (and not something else)?  Where does it come from, within me?

What do you think of when you hear the word “shaman”?  I spent a fair bit of time learning about shamanism when I was absorbed into petroglyphs for a period in my life.  It started showing up in my art: around that time, I was being influenced by 2 different artists: Bill Worrell and the statue/sculptures of  Kevin and Tanner Gadomski,

Bill Worrell’s shaman sculptures (on main blog page) were inspired by the petroglyphs he found near where he grew up, at the confluence of the Lower Pecos River with the Middle Rio Grande, on what is now the border of Texas and Mexico.

The Gadomskis are Ojibway tribe from Minnesota, they make Manitou pieces (below). Manitou is the Ojibway (or Chippewa) word for Spirit or Mystery.

Bill Worrell is a prolific writer (more on him in a later post). Kevin Gadomski had the following blurb on his website and I thought it was reflective of some of my own interests and thoughts so … thanks Kevin:

“My interest in all things esoteric has led me to explore shamanism, totemism, mysticism, Taoism, Zen, Sufism, Animism, nature, reality, dreaming, metaphysics, Kevinism as a life path which are all more or less reflected in my work. Basically, a learn as you go, organic way of being which shuns dogma and indoctrination to any specific belief system and embraces unfiltered experience that doesn’t require interpretation. Gathering, condensing, focusing, and co-creating.”

Wow, “Kevinism” … need to start thinking about what Markism is! 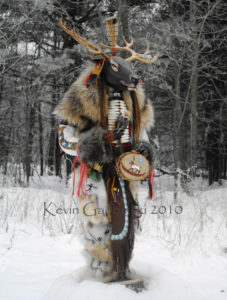 The Future, Is Out There
Scroll to top