“An artist has got to be careful to never really to arrive in a place where he thinks he is somewhere.  You also have to realize that you are constantly in a state of becoming, as long as you can stay in that realm, you’ll be alright.”

” What struck me is that he was at-one or he became identical with his breath..  Dylan had become a column of air so to speak, where his total physical and mental focus was this single breath coming out of his body.  He had found a way in public to be almost like a shaman, with all of his intelligence and consciousness focused on his breath. 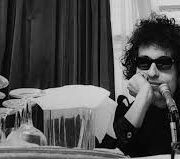 Failure is a Learning Tool
0 replies

Want to join the discussion?
Feel free to contribute!